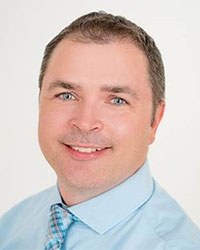 “I am pleased that Dr. Hitchcock has joined Anna Jaques as our new leader in the Department of Pathology and Laboratory Services,” said Joshua Tarkan, MD, medical staff president at Anna Jaques Hospital. “He has a strong understanding of pathology and disease processes and we welcome his expertise to our hospital and our community.”

Hitchcock comes to Anna Jaques Hospital from Waterbury Hospital in Waterbury, Conn., where he started as a community pathologist in 2017 and was then appointed medical director of laboratory services in 2020.

“I am honored to lead the Department of Pathology at Anna Jaques Hospital,” said Hitchcock. “I look forward to serving Anna Jaques Hospital and collaborating with a hardworking and dedicated team to continue providing high quality care for patients.”

“I am so grateful to Dr. Harris for her many years of service to the hospital and to Dr. Rao for her support around the day-to-day operations of the pathology department as interim chief,” said Mark Goldstein, president of Anna Jaques Hospital. “We also warmly welcome Dr. Hitchcock to our Anna Jaques community.”

Anna Jaques Hospital is a part of Beth Israel Lahey Health, a health care system that brings together academic medical centers and teaching hospitals, community and specialty hospitals, more than 4,800 physicians and 36,000 employees in a shared mission to expand access to great care and advance the science and practice of medicine through groundbreaking research and education. For more information about Beth Israel Lahey Health, please visit www.bilh.org.