ALERT
Learn more about our Visitor Policy and COVID-19 Resources.

Joanna Fortna of Haverhill had an annual mammogram in December of 2012, and after a follow-up ultrasound and biopsy, received a breast cancer diagnosis the day before Christmas.

She had a lumpectomy, followed by a 30-day course of radiation, and was treated with a hormone-based medication, monitored by regular check-ups, for the next five years.

Joanna was able to recover physically, with some residual effects on her left side that impacted arm movement. By March of 2014 she was grateful to be better, but she was feeling emotionally down and struggling. She sought support from others who shared her cancer experience. She visited Roots to Wings Studio and derived restorative benefit from the cancer survivor yoga classes that were offered.

A class member suggested she try the YWCA Encore program to connect to a broader network of survivors. Joanna appreciated that Encore was not a general exercise class, rather, the instructors carefully instill trust and help participants gently and gradually build their strength and flexibility.

Open and free to anyone who has experienced cancer, Encore creates friendships and supportive bonds that helped Joanna and so many others build their physical and emotional strength. Joanne’s schedule as an English professor at Northern Essex Community College keeps her busy, especially now that she conducts virtual sessions with her students. However, she is making time for the way Encore has also adapted during COVID, and you’ll find her on Zoom or at Atkinson Common, safely working on her core, while staying connected to this powerful network of thriving survivors.

*The Encore group safely gathering outside at Atkinson Common this Fall. 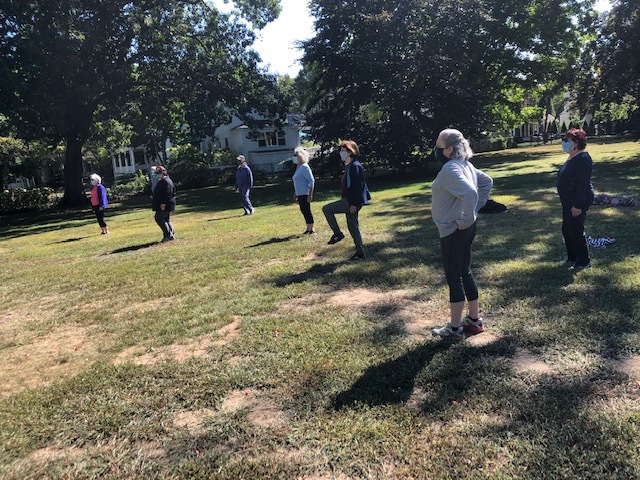